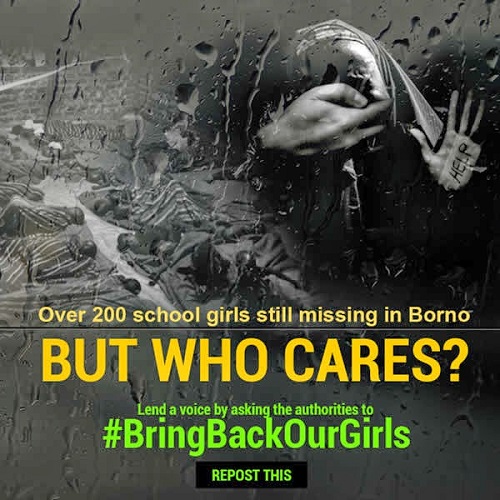 Some think it’s “just Twitter” while others know it’s not but don’t think it matter that much. The truth is, it matters more than you know.

@subomiplumptre shared on this subjects in a series of tweets, which you can read below:

1. I used to work in the Research Department of @AlderConsulting, where I learnt a valuable lesson. #Analytics

2. It’s not enough to collate data. True value lies in understanding what it means & how it can drive decision making. #Analytics

3. On May 20, I read a story by @ThinkProgress tagged, “How The World Quickly Stopped Caring About The Kidnapped Nigerian Girls” #Analytics

4. You can view the full article by @ThinkProgress here http://buff.ly/1pgSH2k  #Analytics

6.Total tweets now stand at 3,586,486 but you can see the decline in daily tweets. #Analytics #Graphic pic.twitter.com/fh5Q6YiNZF

7. There is a world of difference between online advocacy and on-the-ground change. However, both play very important roles. #Analytics

8. Though online chatter has subsided, actions on-the-ground are in full swing as can be seen from the recent march to Aso Rock. #Analytics

9. Impact can also be gauged by troop deployments by the US and Nigeria’s ongoing military operations. #Analytics

10.Perhaps this cheeky statement by Americans in the mid-west is now gaining some credence. #Graphic #Analytics pic.twitter.com/i0bqLoJEI0

11.The lesson for advocacy orgs like @EIENigeria is that for issues-based campaigns, the window for mass online support is ltd. #Analytics

12. Be clear about the outcomes you want and drive them while the topic is hot online #Analytics

13. For #BringBackOurGirls, key objectives have been met. #Analytics

15. Importantly, there is a sense that victims of terrorism in #Nigeria are not as alone as they once were. #Analytics

16.Perhaps none of this would have been possible without the incredible pressure brought on by the #BringBackOurGirls campaign. #Analytics

17. Citizens are now demanding for complete eradication of Boko Haram, not just the return of the #Chibok schoolgirls. #Analytics #Nigeria

18. No longer are we satisfied with just moving on when we hear of incidents in Abuja or Kano or Jos. #Analytics #Nigeria

19. Finally, we have proven that this is no longer just #socialmedia or business as usual. #Analytics

20. #Socialmedia is as effective as any other advocacy tool and can mobilise nations and on-the-ground action. #Analytics

Friends, don’t imagine for one second that your tweet is just a tweet. The Chibok Girls have not yet been rescued. Let’s not get tired. Keep up the #BringBackOurGirls tweets.

Our Chibok girls have been missing for over two weeks. @Cherox suggests that perhaps Nigeria knowingly gave out the missing girls and we were never supposed to know or care…

1. The girls were taken, days later when the news story didn’t die down, the army LIES that most have been rescued.

2. We believe that lie & celebrate until the principal debunks this lie and says they’re still missing. Army is mum.

3. Parents start entering the forest to search for their children. The parents are unescorted by ANY SECURITY FORCES.

4. BH releases threats that if the searches in the forest aren’t stopped they will kill. Admitting they’re in the forest.

5. A week and some days pass before the President summons a security meeting and demands these girls be looked for.

6. This is only after the missing girls start to make international news and the story can no longer be ignored.

7. After this, the reports of girls being seen in pickup vehicles in Gwoza & closer to borders start coming in.

8. Now the story is that these girls have been married off/sold into sex slavery in Chad & Cameroun.

9. Now admittedly, I do watch a bit of TV, so maybe my imagination is too wild, but can nobody else see what I see?

10. These girls were taken, we were not supposed to know about it or care about it. When we did, what did they do? LIE

11. The army would only lie about finding these girls if they NEVER INTENDED TO LOOK FOR THEM! Now why wouldn’t you look?

12. You don’t look for something you knowingly gave away. But the lie didn’t last long& (un)fortunately, outsiders heard.

13. No need to go further, look over the facts yourself. It seems like these girls were GIVEN AWAY. That should scare you.

Personally, I’m still wondering why the ARMY LIED. They didn’t rescue the girls, didn’t even look, and they just lied to us. Why would they do that? Why were they trying to deceive us? It’s not like it’s a joke, over 200 girls! Why such behaviour?