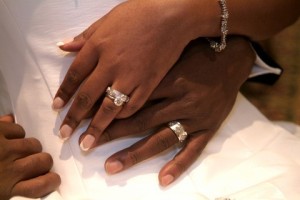 I always wanted to get married at 22. To this day I’m not sure exactly why, but the idea of being a beautiful young bride and getting childbearing out of the way early, greatly appealed to me. Now of course, I’m grateful I didn’t marry at 22, but I also find myself wondering what kind of wife I would have made at that age.

One of my classmates got married when we were in our final year of University. She got married at the age of 22, on Valentine’s Day for that matter. Being the kind of girl I was, in my mind this was the best thing that could happen to anyone. I certainly wished it for myself. So you can imagine my shock when she relayed a story to us a few months after the wedding. She told of how she had a bitter quarrel with her husband, and in her distress packed her bags, intent on leaving. It was only when he asked her where she was going that she realised she really had nowhere to go. Worse still (at least to me) he didn’t bother to pet her- he was rather smug. Where was she going to go?

Many years have passed since then, the teething phases are over and they are still happily married with lovely children. I, though, never forgot that story. The lesson that stuck was that no matter how many rooms there are in your father’s house, once you’ve been given away to a husband you can’t just move back there. And nobody has to tell you this; it’s just a knowing that you’re not exactly welcome. And your “father’s house” isn’t literally a place. Even if you rent a place of your own, your husband’s house would still be where everyone expects you to be.

I did get married five years later than I’d fantasized, and the once vague idea that marriage is not a bed of roses has crystallized with each passing day since. 7 weeks after my wedding, my husband and I had the most terrible quarrel ever, made even more horrible by the fact that I thought it was too early for that. The 22-year old me would definitely have moved out that night and never come back. After all if a man truly loved and adored you, he wouldn’t yell at you so, would he? The 24-year old me may not have moved out, but would have given my husband the silent treatment for days or even weeks after that, and definitely called my mother and best friend on the phone to give them all the gory details.

The funny thing is, he thought I would leave for sure and had braced himself for it. Instead, I made sure we didn’t go to bed angry that night. When he’d had sufficient time to calm down, we spent hours trying to see each other’s side.  Truth be told, I didn’t do this out of any feeling of love, and I’m almost certain the same is true for him. “Thank you for not leaving”, “I’m so glad I stayed” and “I don’t ever want to lose you” would come many, many days later. On that dark night however, it was commitment, sheer commitment to the vows we made that kept us in the same house and on the same bed.

Marriage is not a walk in the park. A woman must spend time developing herself and becoming the right person if she wants to marry the right person. I’ve come to realise that truly knowing yourself, understanding who you are and what your purpose in life is, is an absolute must for anyone who would join themselves to another for life. In addition to this, a woman must be mature enough to put years of Mills & Boon behind her manage her expectations of marriage, basing them in reality. Otherwise she, and her marriage, would be defenceless against the infamous Mr. Irreconcilable Differences who is to blame for the dissolution of so many marriages today. But that’s a whole different article.

The jury is still out on just how closely linked age and maturity are, but while age is not a primary determining factor in gauging maturity, age IS a factor where knowledge and experience are concerned- on this many generally agree.

Still, marrying early is traditionally considered proper and more advantageous for African women. In Africa, women living as single adults and choosing to marry later is a relatively new practice that is not exactly welcome by the older generation. Nevertheless, more African women are postponing marriage to acquire higher education and build their careers. Unfortunately, many of these women find that by the time they are ready to get married, there are no eligible bachelors available. Furthermore, the older a woman gets, the lower her chances of conceiving and carrying a baby to term.

We find that on the one hand, given the economic situation of our day where husbands are no longer the sole breadwinners, it seems more sensible for a woman to wait until she is older, more mature and financially stable before getting married. A career takes a lot of time, energy and commitment to build. Shouldn’t this be done before marriage? Can marriage and career building be successfully combined?

Marry early and you risk never achieving your dreams and never becoming anything more than a mother and a wife. Wait till you’re older, more mature, more in touch with your true self and have built a successful career and you may find yourself having to make do with a less-than-ideal husband, or worse still, no husband at all. If you’re lucky to get a decent man to marry at this point, what’s the guarantee that your not-so-fresh eggs will be cooperative, and that you’ll not soon be a regular at fertility clinics? I’d like to know what you think. Is marrying later really marrying smarter?